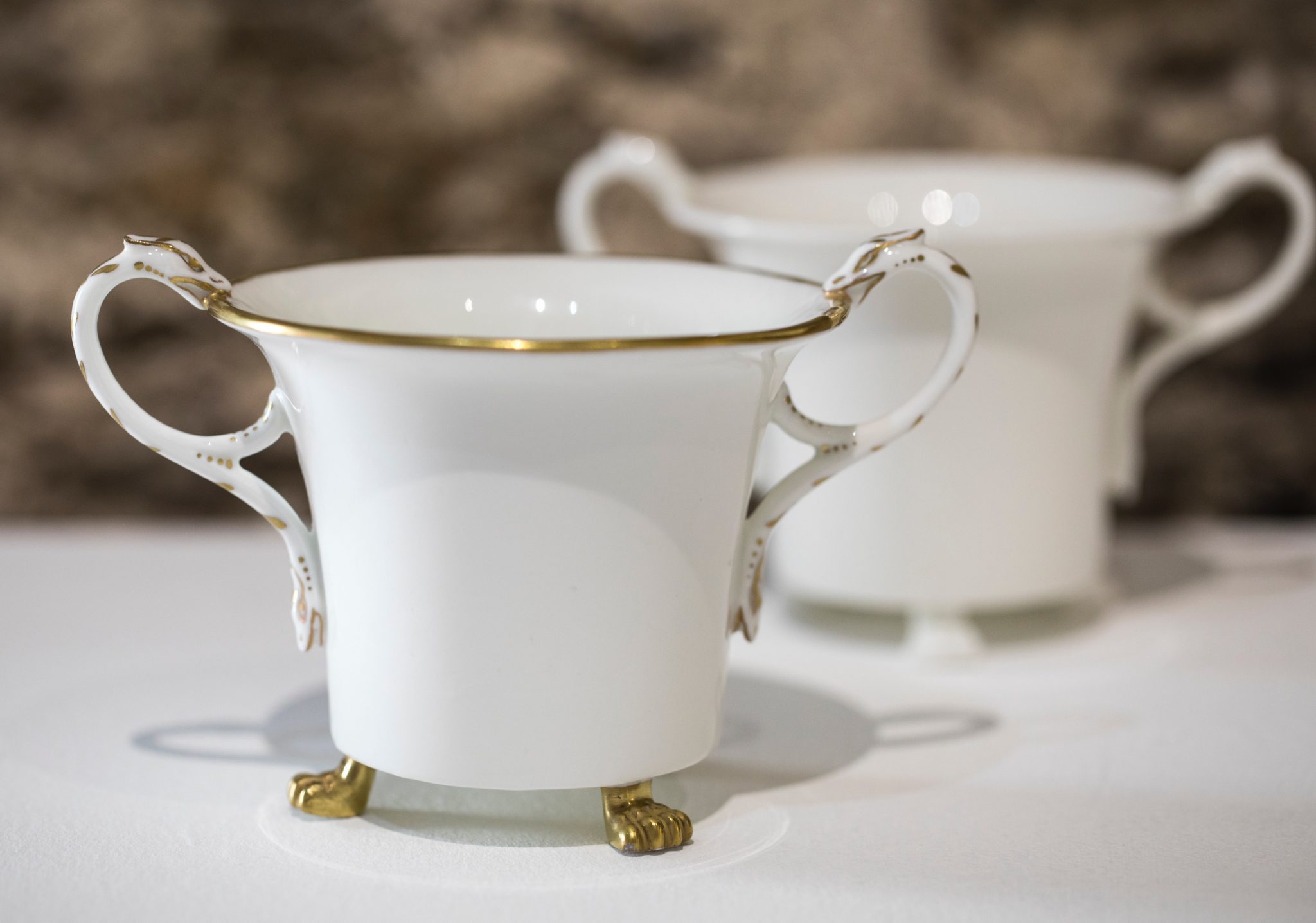 A team working at Nantgarw China Works Museum has successfully managed to recreate the recipe for the famous Nantgarw porcelain, last made two hundred years ago and regarded by many as the finest porcelain ever made.

Nantgarw porcelain, invented by William Billingsley in 1813, was revered as being the whitest, finest grained and most translucent porcelain ever made; however difficulties in firing this delicate porcelain body in the bottle kilns resulted in up to 90% of the work being destroyed and the resultant closure of the factoryafter only four years of production. This original Nantgarw porcelain is now highly collectible with pieces changing hands for many thousands of pounds.

Now, through a combination of methodical historic research, forensic analysis of shards and experimentation, the team based at Nantgarw China Works Museum has managed to recreate the original recipe and successfully fire new work from Nantgarw Porcelain.

The project has taken place over the last six months and has been funded through a Research and Development Grant from the Arts Council of Wales as well as through an innovative Crowdfunding campaign run on the Art Fund’s Art Happens platform. The first items made from the porcelain are being made as one of the rewards for donors to the crowdfunding.

According to project manager Charles Fountain the task has not been easy and the team has had to draw upon expertise from several universities, industrial chemists, current manufacturers of porcelains as well as specialist sculptors, mould-makers and slip casters.

“No one has made a porcelain like this for the best part of two hundred years so we have had to adapt and develop new techniques both to create it but also to successfully mould, slip cast and fire the new work. The new porcelain is visually identical to the original and shows the same exceptional translucency. Quite frankly it is beautiful, totally unique and unlike any other ceramic body available today.”

Howell Edwards, Emeritus Professor of Molecular Spectroscopy at the University of Bradford has conducted Raman spectroscopic analysis of the new porcelain and compared it to similar analysis he performed on shards of original Nantgarw porcelain earlier this year. According to Professor Edwards, “The results of the analysis show that analytically the Nantgarw original and the new Nantgarw porcelain are spectroscopically almost identical, with only very minor differences indicated that could be easily ascribed to the sourcing of raw materials.”

Sally Stubbings, resident ceramicist at Nantgarw China Works, who has led the development of the porcelain and slipcast the new work stated, “We have learned a great deal more about the porcelain and now understand the difficulties they had in firing this ceramic body in the early nineteenth century. Many of their problems centred around not being able to have precise control of the heat and temperature in the early bottle kilns. Using modern electric kilns we have discovered that even a few degrees difference in temperature can have a huge effect on the way the porcelain behaves. This level of control was totally impossible in a coal fired bottle kiln.”

The team acknowledges that it is still at an early stage and has plenty of work to do. Charles Fountain continues, “Each day we are learning more and more about the porcelain and how to get the best out of it. At the moment it is suitable for slip casting and press moulding however we are looking to try to increase the plasticity of the porcelain to also make it suitable for handbuilding and throwing on a potter’s wheel.’

“We will now be focussing on commissioning exciting contemporary artists to start making new work from the porcelain which the Nantgarw China Works Trust hopes to present as an exhibition in 2019.”

Examples of the new porcelain can be seen in a small exhibition at Nantgarw China Works Museum. The exhibition will run until the end of January 2018.